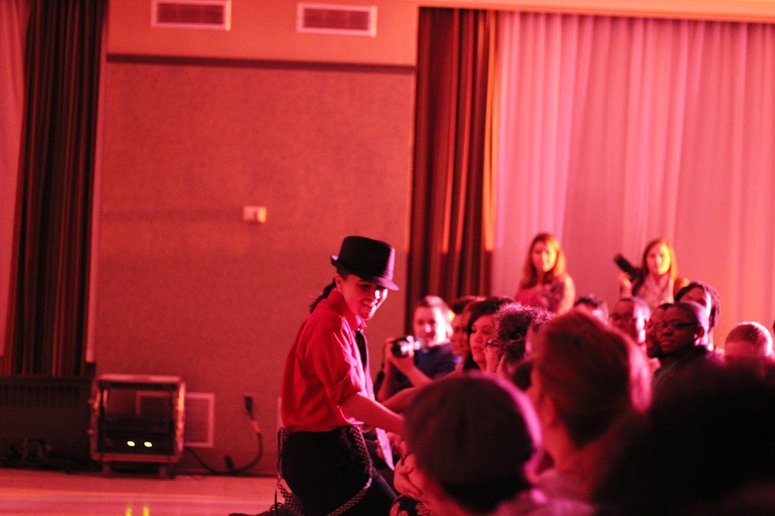 The month’s activities will also include Pride Prom.

“Pride Month is about celebrating being happy,” Struble said. “It’s the fun time of year because so much of our time is spent dealing with hardship.”

The Resource Center will co-partner with MSA Films to show “Bully” on Wednesday, and it will team up with the Craft Studio for an art gallery showing that opened Monday and will continue through Friday.

OUTGrads, an organization for LGBTQ graduate students and professionals, will be hosting a happy hour on Friday and Coffee Talk on April 20.

The MU Department of Theatre is performing the play “Angels in America” and presenting a discussion about experiences of being LGBTQ in the performing arts world. The discussions will be held on April 24 and the play will run from April 25-27.

Struble said she is very excited for the discussion the Resource Center is co-hosting with the Athletic Department called “TimeOUT: LGBTQ Issues in Sports” on April 9. The discussion will cover the issues surrounding LGBTQ athletes.

“We’re hoping to get some varsity athletes to come to the discussion,” Struble said. “It will be a real talk on issues that are tough since there are no out athletes in the three big U.S. professional sports.”

The Pride Prom, which is co-sponsored by the Triangle Coalition, will be held April 6. The event is open to everyone, and Struble said there will be a photo booth this year. She said the Resource Center expects almost 200 people to attend the event.

The “Let’s Get Loud Drag Show” will showcase performances from a variety of drag queens and kings, according to the LGBTQ Resource Center’s website. The Drag Show will take place April 12 in the Mark Twain Ballroom.

Freshman Trevor Beyatte, who has performed in previous drag shows hosted by the Triangle Coalition and LGBTQ Resource Center, plans to participate in the Pride Month Drag Show as well. He said the fall drag show brought in a lot of people and he said he hopes this one will as well.

“I hope it brings people who have never experienced drag shows,” he said. “I hope the attendees have a really fun time and appreciate drag shows as an art form.”

The Pride Parade will take place on April 24. Struble said the goal for this year’s parade is to have more campus organizations come out and show their support for Pride Month.

“I’ve been telling organizations to bring their own posters and wear their shirts during the parade,” Struble said.

Poet and activist Andrea Gibson is scheduled to be the keynote speaker on April 24th. And the last big event will be the Queer Monologues on April 28, which displays MU-written, produced and performed monologues about LGBTQ experiences in the community. Gibson will speak in the Mark Twain Ballroom and the Queer Monologues will take place at Wrench Auditorium.

Freshman Delan Ellington, who will be experiencing Pride Month for the first time, said he is excited for the play and keynote speaker, as well as the Pride Parade.

“I’ve heard the Pride Parade is really fun,” Ellington said. “And Andrea Gibson, I’m not a huge fan, but I like what I’ve read by her.”

The Resource Center is also introducing new topics for discussion this year, including sessions about bisexuality and LGBTQ Asians.

Beyatte said there is always something to learn about the LGBTQ community and Pride Month helps the education process.

“It’s good to be able to have that month to learn about our own culture,” he said.

Struble said the Resource Center hopes event attendees will gain understanding about LGBTQ experiences and lifestyles. Ellington said he agrees with her.

“I hope (attendees) will gain more understanding about the queer point of view and what they go through (by going to the Monologues),” he said.