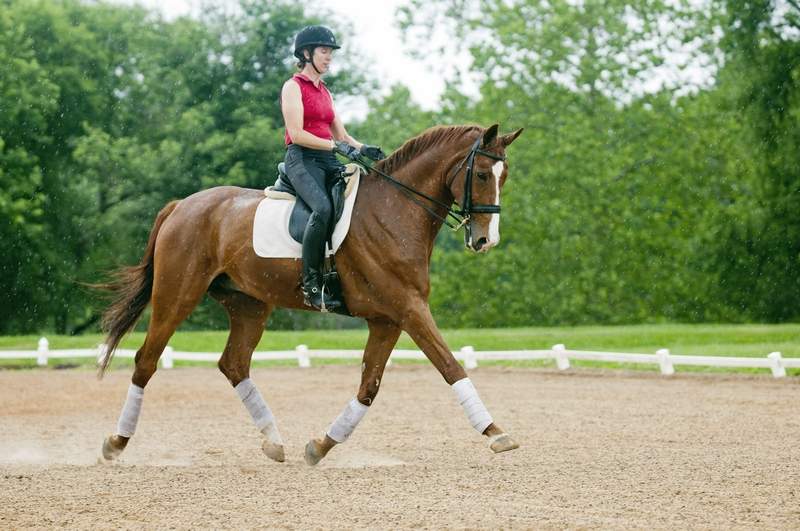 by Katie Pohlman
Special to The Gazette

Teams of horses and riders in matching costumes move around a ring, performing steps and motions perfectly choreographed to music that they have practiced for months, even years. Some riders even dare to perform gymnastics on top of the moving horse during their routines in the Dancing Horse Challenge, the star event of the 10th annual Ride for Life scheduled for this weekend at the Prince George’s Equestrian Center in Upper Marlboro.

The Dancing Horse Challenge was modeled after an event in Florida called Challenge of Americas. Participants can choose which riding style to perform, ranging from freestyle to tricking, and are judged by the audience in a “people’s choice” style. Only one team is allowed in the ring at a time, but teams can include multiple horse and rider pairs. The biggest team in the competition this year consists of 13 pairs, Sagal said.

The Challenge is part of the first day of a weekend of events to raise money for breast cancer research and support for patients that include a silent auction, dressage show, arts and crafts activities and a black-tie-optional gala. The Ride for Life event is hosted by the Potomac Valley Dressage Association.

Columbia resident Patricia Artimovich, a breast cancer survivor, originally started the event as a single-day dressage show to raise money for the Johns Hopkins Avon Foundation Breast Center. But over the years, it began to attract more people, some of whom had never been near a horse before, Sagal said. The event coordinators decided to add other activities to the schedule to accommodate the growing crowd. Ride for Life now draws around 6,000 attendees and has raised almost $500,000 for breast cancer support.

“(The event) attracts the equestrian community as well as people who don’t know anything about horses and just want to see good entertainment,” Sagal said. Most of the riders participating in the show have many years under their riding helmets, like Barbara Strawson of Clarksburg who has been riding horses since she was five years old. Strawson first rode in the Ride for Life in 2005, when it was solely a dressage competition, after being invited to the event by Artimovich. Many of the riders either volunteer to ride or are asked to participate by event coordinators, Strawson said.

This year’s Dancing Horse Challenge will be Strawson’s first since its inaugural year.

“We were looking for a way to bring in the whole public, spread awareness, and show people how beautiful horses are and how helpful they can be in the healing process,” she said,

Therapeutic horseback riding is a growing field in therapy. The personal relationship formed between the horse and rider helps with emotional healing and for those with physical disabilities, the horse allows them to move freely, according to the American Entertainment & Equestrian Alliance’s website. This form of therapy is used for many illnesses, including cancer.

Most of the participating riders in the Ride for Life events have either been affected by breast cancer themselves or know someone who has been. They ride because they want to show their support for those suffering right now and how they have survived the disease themselves, Betty Thorpe, a rider from Silver Spring, said.

Thorpe is a breast cancer survivor, but said she was lucky enough to only have a “little brush” with the disease. She said she rides for those who have had harder times with cancer.

Even though the event is a competition, she said the atmosphere between riders is supportive and caring and that spreads to the audience as they watch them ride.

“It’s something I can’t describe, it’s some kind of magic,” she said.

The weekend begins 8 a.m. on Saturday with a dressage show. A silent auction will run throughout the day and arts and crafts activities will be held from 11 a.m. to 4 p.m. The Dancing Horse Challenge is scheduled to begin at 6 p.m. The black-tie-optional gala will formally begin after the Challenge at 9 p.m., cocktails will be served at 5 p.m. The dressage show will continue on Sunday from 8 a.m. to 5 p.m. All events will be held at the Equestrian Center.

Tickets for the Dancing Horse Challenge are a suggested donation of $25 per person. All money collected through ticket sales and the silent auction will go to the Johns Hopkins Avon Foundation Breast Center.